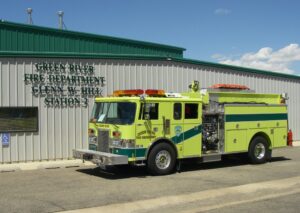 It’s been over six months since the Green River Fire Department has had a chief. Last month the former chief, Mike Nomis, was sentenced to 3-7 years in the state penitentiary for embezzeling nearly $100,000 from the green river fire department foundation.

Nomis accepted a buyout package offered by the city earlier last year. the city offered the buyout after charges were brought but prior to Nomis changing his plea to guilty.

City administrator Reed Clevenger would not comment on the details of the buyout offer or how much it would cost the city.

In previous instances of city employees embrioled in criminal legal issues, employees were placed on paid administrative leave. That was not done with Nomis. Clevenger simply said the bond requirements were different in this case but again would not elaborate.

In 2016, in a surprise move, Nomis was appointed to the position of fire chief. The appointment leap-frogged Nomis over the interim chief, Mike Liberty. Liberty has been on the department for 19 years, a command officer for 12 years and assistant chief for eight years. Liberty subsequently resigned from the department in 2018.

Brought to you by our affiliate, SweetwaterNOW.com: